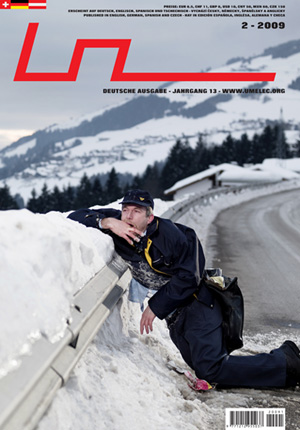 Escape, convulsions, stiffness and, in the worst case, a loss of all self-control. These are symptoms of a panic attack; they are triggered behavioral patterns. It was no panicky loss of control; rather it was a calculated dosage of voices – an outcry in reaction to Austrian Interior Minister Maria Fekter of the conservative Austrian People’s Party (ÖVP) and her attempt to garner media attention a few weeks before the 2008 parliament elections.

Non-native Austrians, she declared boldly, cannot achieve Austrian citizenship and are more inclined to deviate from the general cultural outline. One cannot back this idea up with crime statistics alone. Recent polls have shown that members of the government are also profiting from and taking advantage of racial stereotypes and prejudices surrounding the growing crime rates of foreigners. Voices against everything foreign and non-Austrian already had a significant impact, in February 2000, with the governmental coalition between the ÖVP and Jörg Haider’s radical right-wing Freedom Party of Austria (FPÖ) – and then, of course, there is always what the EU and its member states think.

Eight years later, the „Iron Lady“, as Fekter likes to be called, appropriating Margaret Thatcher moniker, has appeared in a coalition with the social democrats for the expansion of the Austrian rights for the so-called „cultural deviants“. One can specifically see this situation occurring in the near future: an immigrant with Islamic beliefs beats his wife and the question arises whether his culturally justified behavior should be considered when deciding a suitable penalty? An Austrian criminal who was baptized as a child and should have the dominant understanding of „majority rules“ and for the same offense he has nothing to fear. A legal expert has to issue an emergency ruling in the name of safety!

Every judicial review of a person belonging to a minority would result in proactive, public protests so the whereabouts in the governing council would remain unthinkable. Not so in Austria. Here, such empty efforts at equality have garnered occasional praise… This might be of some surprise, as in the previous case in which this senior politician, who carries the highest governmental responsibility for the fight against crime, has penetrated very deeply into the cultural sphere. Indeed, in the past, the official position of Austrian cultural and educational policy has always been one of silence. Silence means no rejection, and never any oppositional complaining – not even from the art world.

The constant expansion of law and order politics describes not only the spiritual-cultural atmosphere of Austria, but it also makes the point that art, culture and the media has reached pervasive displacements. The artistic resistance – once flourishing during the years of ultra-right-wing domination with diverse rebellions and widespread insurgencies against privatization – didn’t last very long.

Global trends in political restrictions surrounding art production and sustainability have coined even the Alp republic, all to the country’s great disadvantage. Much like the public realm, the character of art, which was a central postulate of the social democratic parties‘ intended social reform in the seventies, was subjected to a massive policy of roll backs in order to soften the primate of the neo liberal utilization logics. The entertainment industry evolved with cultural events and festivals from year-to-year despite declining profits, while the critical voice of artists continued to be subdued.

It had been discussed that, with careful support to those who keep quiet in keeping with the tranquil fit of the cultural administration, there could be some economic benefit. But it wasn’t always this way. Even though there weren’t many of them, a few years ago, cultural projects and artistic undertakings existed in Austria. These consequently opposed economization and supported politicization. Neither creative economies, diverted profits, vanity or outright profiteering stood in the foreground. The primary objective was a background altercation with the new methods practiced by the decision makers – privatization, control and security – and an attempt to acquire the self-determined artistic initiatives and medial spaces.

The Vienna media/culture platform Public Netbase, which achieved international recognition from 1994 to 2006, was allowed to be mentioned as an example, but was unable to survive in lieu of its dissident character. At the same time, Public Netbase was able to enjoy many activities, art-, politics- and media-based interfaces that have a huge international following even today. Because of their good relations with independent content producers, critical contentions with social developments like media literacy, which announced a variety of cultural techniques for the future.

Projects like S-77CCR, which was an instillation that used a self monitoring device known as Kommando Freiheit 45 with a virtual cow being kidnapped as a critical intervention to the governmental spectacle on Austria’s anniversary in 2005, and nikeground rethinking space, which has been around since 2003, have both left a lasting imprint on the country’s memory. These concepts were created especially for the Karlsplatz in Vienna’s city center, which was used as a venue for thought experiments and to host wide-ranging and media-rich discussions.

For four weeks a high-tech glass pavilion was erected and immediately thereafter the Karlsplatz was renamed Nike-Platz. A widely-visible on-site construction of a 36-meter-high monument in the shape of the company’s logo triggered, as expected, a broad campaign in the local letters to editor columns and a parallel website. There were bold reactions in politics and media. The intention of the piece was to initiate a controversial debate over the matter, how far open space, and its cultural configurations, could be of concern for the appropriation by the interests of capital and the power in interpretation about being a symbol for daily life. This was appealing and it set forth and implanted itself long after the end of the Public network in many discourses, exhibits and publications.

„The spectacle“, wrote Guy Debord almost a century ago, „is quite simply the ideology, because it represents the knowledge of every ideological system in its abundance and says: The depletion, the subjugation and the negation of real life.“

In order to destroy this framework, one of the co-founders of the Situationist International came to the vital conclusion, „the human needs to call out a practical aggression“. The French author and filmmaker Debord still believes in the artistic fight against capitalism and the reign of commodities.

Those who are looking for resistant Austrian art in the year 2008 must be satisfied with disenchantment. Dissidence has made room for conformability because repression, in the form of deprivation of funding, bureaucratic hurdles and existential distress has forged a very strong alliance with the spectacle. „Art is the universal butterfly for this“ instructs British political aesthetic professor Esther Leslie, „that cogs, in the center of the economic life, are able turn more efficiently and the joints of society are able to grip into one another much more smoothly“. So, it shouldn’t come as a big surprise that the Utopia of art is becoming an unprincipled art historical curiosity.

If such emancipating professionals of art, media and culture really seek to use their impetus to find new meaning in social evolution, then a recuperation of that which deviates from convention is called for. The system still recoils from any public expression. The big challenges are no longer avoidable and require new answers and solutions to take effect, especially from the artists‘ intellectual codes of refusal and radical gestures. Without this, contemporary art will endure only fleetingly. The social coverage of the artists‘ work – a strong proponent thus far in discriminating and underrepresented positions – remains largely unrepresented by any commercially interesting, independent media sector; the copyright industry and its privatization of art and knowledge production likewise limit expression. All of this should be alarming enough to end the public’s dispute effectively. If successful, new light would be shed upon the utter chaos created by Austrian safety policy.