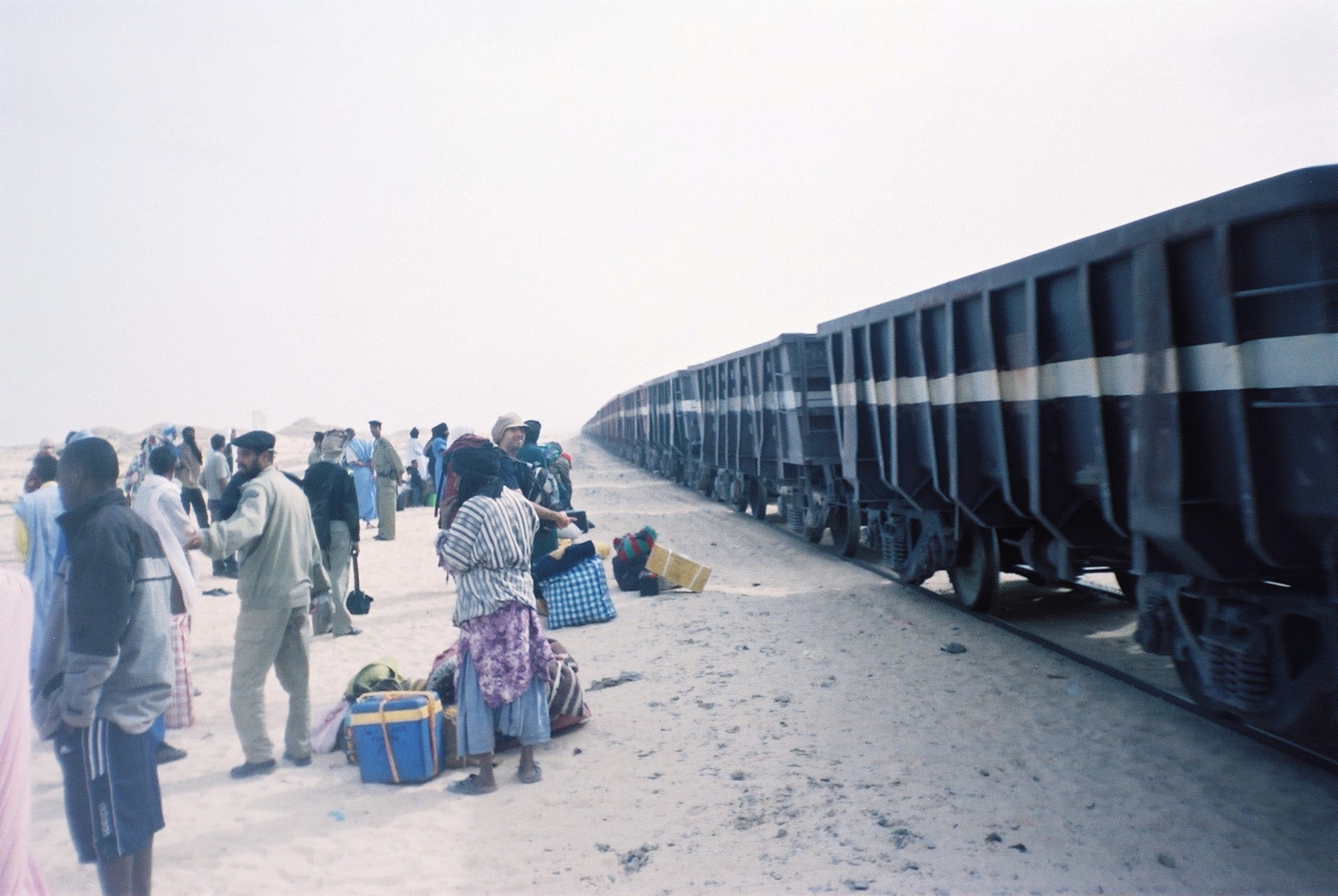 Mauretania, in the harbor city of Nouadhibou. Those who stop here to flee the violence of the complex calamity of the African continent find themselves in a state of exception where politics are barely distinguishable from the logic of war. Nouadhibou is but one allegory for the many detention centers on the North and West African coasts, where, according to official estimates, roughly a million people are waiting for the right moment to get to Europe. Every day after nightfall dozens of cutters depart, only very few of which are fit to navigate the ocean. Anonymous, scared stiff and without means, the human freight enters onto a stage where there are no stage directions in the 21st century that can fulfill its greatest wish: mere survival.

The stage is not set according to any artistic concept; it only has an inside and an outside. For the actors romping about on this stage, there are no roles or choreographies that have arisen from a vision of a just world. The set-up seeks to deter the rolls of thunder, as it invokes abstruse dangers and aspires to create a form of divestment that is meant to uphold the political system of police control beyond borders. Giorgio Agamben writes in Homo Sacer – Sovereign Power and Bare Life: „Bringing to light the difference between birth and nation, the refugee causes the secret presupposition of the political domain – bare life – to appear for an instant within that domain.“ Therefore the refugee must, as the Italian philosopher concludes, „be considered for what he is, nothing less than a limit concept that radically calls into question the fundamental categories of the nation-state, from the birth-nation to the man-citizen link.“

The categories of the nation-state that Agamben postulates as fundamental were laid to ruin long ago. Caught up in the destructive wake of politics, they took shelter behind the fortification of a wagon circle: one that is isolated, fearful and looking inward, heavily armed and hence immobile. After millions of murders over two world wars, destruction and forced displacement, Europe is far from delivering on its promise to create a new order that is both solidary and economically just. Although the political uprisings in the Arab world in early 2011 brought about widespread enthusiasm, when people are forced to flee as a result, the allegedly pristine community hides out behind its barricades. Seeking refuge – one of the most fundamental human rights that the European community is actually obligated to protect – becomes stylized as a demon that must be dealt with by mobilization: militarily, intellectually and culturally.

This is where a certain inhumanity makes its big appearance – the mythical gesture of which is the raised sword against those who see no personal future in their countries of origin due to global price rigging, despotism and ecological destruction. It is no different for the hundreds of thousands of new refugees forced to leave their familiar environment, not least due to the deployment of European high-tech weapons against Libya. Thus, the amount of anonymous freight in the little boats has dramatically increased, and with it, the number of those who have lost their lives in the waters off the shores of Sicily, Malta or Crete, because the wagon circle simply refuses to offer the necessary protection and accommodation to those desperate and in danger. The fact that it has come to this is not simply the random outcome of Europe having expressed the will to establish an agency for operative cooperation on its outside borders. Frontex, as it is commonly and euphemistically called, is the frightening outgrowth of a thus far effective full-scale attack on the generally binding fundamental rights in the state of law and, at the same time, it symbolizes a sharp break within the paradigm of political culture.

The widespread sanctioning of employing military means to ward off people who, by force of circumstances, seek refuge is the fatal effect of an identitary onslaught, which has also claimed the particularly serious casualty of human rights consciousness in everyday life. There is hardly any resistance – including in Austria – when soldiers march along state borders believed to be obsolete and, most likely unknowingly, act as a saber-rattling gang that continues to uphold the notion of a particular kind of outside comparable to the „hole of oblivion“ that Hannah Arendt writes of in The Origins of Totalitarianism. Here, she writes that despotism does away with anonymous life, which must sink into oblivion to ensure that there is absolutely no way to prove it ever existed, paving the way for total domination. The fear of the destruction of social order also has its origins here. It is a fear not only meant to keep intruders out, but is also aimed at the willingness of those on the inside to become fully subordinate, and creates submissiveness, passive compliance and open collaboration. Within this point of view, Agamben gains a quite eerie relevance: „On the one hand, the nation-states become greatly concerned with natural life, discriminating within it between a so-to-speak authentic life and a life lacking every political value […]; on the other hand, the very rights of man that once made sense as the presupposition of the rights of the citizen are now progressively separated from and used outside the context of citizenship, for the sake of the supposed representation and protection of a bare life that is more and more driven to the margins of the nation-states, ultimately to be recodified into a new national identity.“

After the end of politics, cultural politics is found writhing in the remains of its own failures. Consciously tolerating this „concern with natural life,“ has definitively rid it of any backbone it still had. There it lies: powerless, motionless, void of any ideals or stance. For quite some time now the mighty banner of human rights has disappeared from the ranks of ministries, art institutions, syndicates, cultural associations, media projects, which are predicated on understanding civil society as a culturally diverse and conflictual domain and , without cultural political intervention, they will continue to lack any substance. This terrain has been surrendered over to the generality of a rumbling wagon circle, built to defend with an architecture that leaves no room to ensure that fundamental rights are protected. In a climate of racism, intellectual confinement and devout submissiveness, seeking refuge has progressively become an offence, now prosecuted using methods similar to criminal law. In doing so, military and security forces have been granted sovereignty over a situation where refugees, who end up at the borders of the nation states, along with many others who have been marginalized and criminalized, are ground to a pulp by the millstones of police and bio power.

For many years now, cultural policy-makers have largely refused to acknowledge that through the proliferation of the camp, which Agamben describes as the space of modern political delocalization, the state of exception has long since become the social norm. Instead of feeling responsible and taking action, say, by having cultural policy reposition itself to become a disobedient machine of criticism and reflection in the face of the dictatorship of financial markets, global repressions and ecological catastrophes, the material awareness is almost exclusively focused on the frivolous hustle and bustle in the representative sheen of high culture, cultural heritage and art spectacles. The wagon circle has thus, not least, been inebriated with the illusion where, to once more quote Hannah Arendt, a „skillfully manufactured unreality“ systematically robs humanity of its capacity to act – with dramatic consequences. The state of exception with its logic of war, not only brings to the attention of concerned human rights organizations the isolation and control of refugees along African coasts, but also the consequences and often fatal practices of the Austrian laws on immigration and foreign nationals relentlessly continue constructing the invisible barbed wire enclosure around the peaceful idyll. The deportation of people seeking to claim the right to asylum and a fair trial has taken on such inhumane proportions in Austria and the European Union that the constitutive reference to the humanist roots, which form the basis of the binding community law, must be read as an especially perfidious mockery.

It is in this domain, upon this stage, that the refugee reveals his bare life, as he is on the outside. He is excluded and treated as an anomaly and a „living corpse,“ as Hannah Arendt wrote half a century ago. She warned those who came after her that while the refugee might be the most obvious example, on a global level, other demographics are to follow, through exclusion from the public domain and also the destruction of the human condition. The homeless, AIDS patients, Roma and Sinti, poverty-stricken people – the numbers are continually increasing. Within this scenario, those who wish to resist using cultural politics must declare war on the wagon circle, disrupt its disastrous order and immediately disarm it.

More than half of the world’s population currently lives in cities, which symbolize the interdependence between the inside and the outside like no other political space. This is accompanied by the global trend of urban space rapidly becoming crystallized into a space of social and cultural conflict. Here, subaltern existence is being targeted by a highly militarized control and security apparatus, which certainly cannot be transgressed by having municipalities commit to diversity management, intercultural amusement and opportunities to take part in participatory projects. The state of exception, which is bringing about a radical crisis regarding discipline and normalization within the steadily growing metropolises, is manifested in different regimes of representation. This calls for intelligent ways of engaging with the depictions of „zones of indefiniteness“ in art, culture and media. Bare life must be translated into an appropriate representation, into a form of visualization that is mindful not to utilize the construct of community as a backdrop for reenacting identity and belonging – there’s already enough of that in the wagon circle.

In reality though, zoning and social fragmentation offer a chance to give new strength to social movements. Cultural politics can also forge hope that tactically employing new technologies, for example, may indeed be a way to escape the „holes of oblivion.“ Only with the knowledge of those who have remained powerless and invisible until now can technological development become a cornerstone upon which collective empowerment and social transformation may be built. In any event, creating new possibilities for participation may allow for political representation to return to those places that have long been permeated by symbolic dominance and coercion used to preemptively stifle the intellectual conditions for resistance, attempts to escape or counter-violence. Therefore, if cultural and media dissent were to dislodge the camp gates from their hinges and culture policy were to emerge as a cultural politics that opposes the logic of war with all its might, then there might be a chance for refugee flight. Perhaps, one day, he will come onto a stage in Nouadhibou, one where the outside, with its disenfranchisement and annihilation, does not swallow him whole.